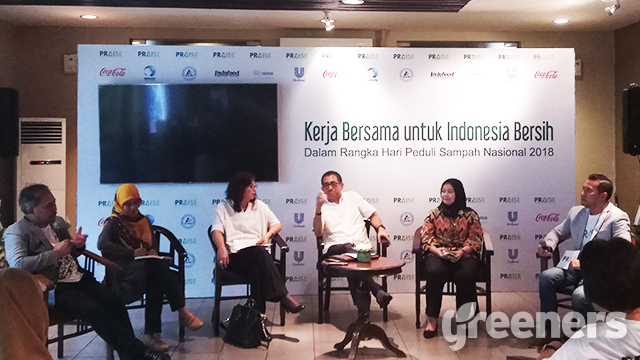 Jakarta (Greeners) – Amid current waste management still using old method, a senior official of Ministry of Environment and Forestry claimed to launch a new economic model called circular economy where wastes can be re-used and have high values resulting to reduce waste volume.

“This waste management with circular economy has already running under regulations, especially a presidential decree issued in 2017. The aim of circular economy is to reduce waste volume,” said Director General of Waste Management, Toxic and Hazardous Substance, Rosa Vivien Ratnawati in Jakarta on Wednesday (28/2).

Furthermore, Ratnawati said that developing waste banks was part of the districts to implement circular economy as wastes have already been sorted from houses and people manage their own banks to increase economic values.

“Man produces 0.7 kilograms of waste per person per day. Without waste banks, those household wastes will be collected straight to landfills and no added values. However, with waste banks, people will sort the wastes to add more economic values, such as plastic packaging or bottles and reducing waste [volume],” she added.

“If linear economy means after consume then throw them away then there’s aspect of sustainability in circular economy as its concept is to consider further values after being used or whether it can be recycled. If that’s what happens then environmental balance is achieved in ecosystem because nothing goes to waste and better consumption. If there’s left over from the product, it can be re-used over and over again,” said Kaniawati.

Nevertheless, she said that the system still faces obstacles such as land availability, mindset, perception and attitude towards waste. In addition, there’s the need for regulation to control for circular economy to be in place.