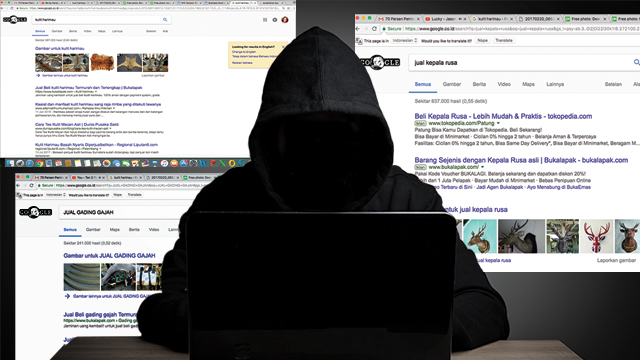 Dwi added that the communities or collectors of rare animals were educated people which established a specific chat groups to discuss on the issue. They are in small groups but in large numbers and spreading. These people, he said, were aware on the internet use and social however their knowledge on protected animals was lacking.

“Most of them are young people, such as college students, students and they’ve known the internet. They loved to pet these animals. And, this is the large portion. They understand the internet, they know how to contact the sellers, and there’s that, [they were being facilitated],” he said.

Furthermore, he said that Facebook was still the favorite social media platform for the selling. Apart from being accommodating, the social media is being used also by people in regions. Despite of being blocked, they could just set up another account making it hard to trace.

The illegal trading chain in social media started from the buyers spotted the items on the internet, then they would contacted the sellers. They would be contacted through a call or short message. The sellers would need to verify the buyers to avoid the police. If the price is right, the sellers will give the bank account for the payment.

Growing social media users has become a significant factor in the illegal trading scheme, mostly because it’s a trend of information and technology development, and it’s safer to trade as the animals don’t really need to be at present. In addition, the sellers don’t need to open up shops, hire places, and it goes international.

Based on Wildlife Conservation Society – Indonesia Program, the PISL network had reached 15 states in Asia, Africa, Europe, and Latin America with most transactions through Facebook, Blackberry Messenger, Twitter and Instagram.

WCS had actively dealing with the first online trading case in 2011 collaborating with the police.

“Up to date, there are 41 cases in five provinces involving 51 suspects,” he said.