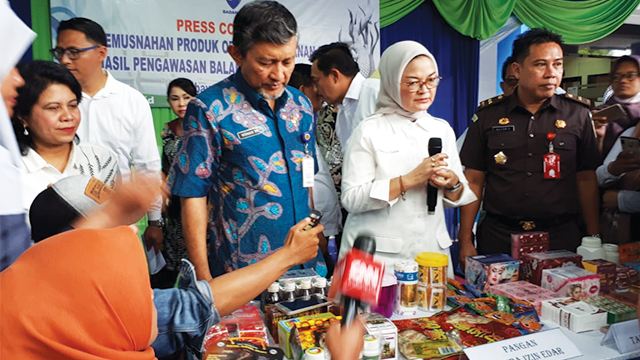 Surabaya (Greeners) – Indonesia’s Drugs and Food agency, or BPOM, destroyed at least 962 items or (446,452 pieces) of illegal drugs and food confiscated in Surabaya, this mid December. The confiscated items were worth more than Rp10.7 billion (US$739,771).

Penny K. Lukito, head of the agency, in a press release stated that illegal products, — cosmetics, traditional medicines, food and supplements — being destroyed in Surabaya were increasing compare previous years.

“Currently, illegal products found are cosmetics because of increasing demands on these cosmetics and there are lots of teenagers loving make up and bought them through online. So, you need to be aware while purchasing its safety, quality and health must be met. Remember to check on Cek KLIK, its packaging, label, its permits and expiration date before purchasing or buying products,” said Lukito, in Surabaya on Tuesday (18/12/2018).

In addition, 247 items (171,988 pieces) of illegal food packaging worth more than Rp1.6 billion. All items were destroyed under the order of local court.

Lukito said that it is the effort of the agency to protect consumers from the harms of consuming illegal products and prevent them to be back in the market.

Hence, the agency will increase its monitoring on the food and drugs distributed by online, suc as intensify its cooperation with cyber crime at the police station.

READ ALSO: BPOM Raided Illegal Cosmetics and Traditional Medicine Worth of US$ 9 Million in 2018

Hendri Siswadi, deputy of enforcement at the agency, said that there are 600 websites selling illegal products as being compiled and reported to ministry of communication and information.

“Apart from online trade, there is also the mode of imported food and drugs but packaging or made in Indonesia with poor and insufficient facilities. There are lots of new operating mode or changes. These things need to be informed to consumers so they won’t be scammed,” said Siswadi to Greeners.

Based on Storm Operation, Pangea Operation, and regional and national operations in 2017, Surabaya drugs and food agency have handled 21 cases of violations in drugs and food. All the cases have indicted in the courts with the highest punishment was three months and 15 days in prison and Rp25 million of fine.

Meanwhile, in 2018, the numbers of cases reaches to 21, with 12 cases are still being investigated, three cases have been handed to district attorney, and six cases are waiting for trials.