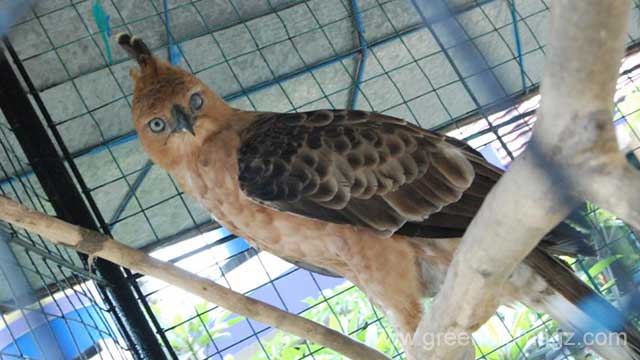 Garuda may have been an imaginary character from old Hindu book of Mahabrata. The eagle look alike character is the son of Begawan Kasyapa and Sang Winata, another mystical characters, and Garuda later received honored to be presented as the transport of Vishnu, one of the highest Hindu God.

In real life, thus, many people believe Garuda is real and they are featuring an eagle. In Java, many people believe Javanese Eagle is the Garuda itself. And Indonesia government has established Garuda as the nation emblem in 1950, and because of Javanese Eagle resemblance to Garuda, the bird was set as national fauna by the law of Keppres No.4/1993.

The endemic bird has Latin name Nisaetus bartelsi. It length from its beak to its tail stretch from 60-70 centimeters and the feathers color is dominated with pale brownish yellow with black lines. The eagle has high signature 5-4 feathers topknot on its forehead, which differentiate it from other kind of eagles. The Nisaetus family also has feathers from their legs to the claws and the female is bigger than the male.

As endemic Java fauna, the eagle counting their lives on the left over tropical forest in the most populated island of Indonesia, Java. They lives in tropical forest at height of 0-200 m dpl, and for the last ten years, they also seen at 500-100 m dpl. Syartinilia and colleagues research in 2010 said it might 325 pairs of  Javanese Eagle left living in the wild.

Zaini Rakhman in his book, “Garuda, myth and facts in Indonesia”, stated that at present Javanese Eagle left stranded in top of mountains of high hills of Java. Condition which Rakhman considered as dangerous, since preys was limited in that height.

The main prey for Javanese Eagle is local mouse lives in Java Island from the species of Sundamys maxy. Tragically, the mouse which known as Bartel’s rat, named after Javanese Eagle discoverer, also considered endangered by international fauna organization of IUCN.

Despite rats, Javanese Eagle also know to prey small animals such as squirrel, fox, or even an infant long tail monkey. From its diet, Javanese Eagle can be seen as top predator in nature food chain. Therefore, it is important to keep them conserved, as their ecologically act as the predator to keep mouse and snake population in the area not to boom.

Javanese Eagle used to be seen at high and green trees, which height around 40-50 meters. They may choose the environment to protect and nurture their chicks from other predator. This has made them hardly been seen in the wild.

Less and less forest cover in Java contribute to make them hard to be found too. Rarely, Javanese Eagle is seen hunting in open space for snakes or other reptiles. This, of course, is a concern issue, with the growing of illegal hunting and fauna trading aside. And to make it worst, this magnificent bird lay eggs once every 2-3 years only.

Without any strict law to protect them, this Garuda of Java might soon, indeed, becoming the nation myth.

Hariyawan Agung Wahyudi is a conservationist and founder of Biodiversity Society in Banyumas, Central Java. 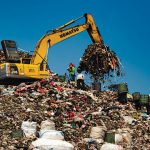