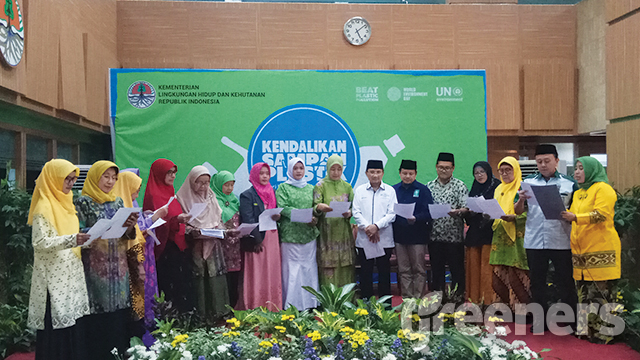 Furthermore, Ratnawati said that as waste issue is related to changing the mindset, the ministry had approached NU and Muhammadiyah to promote the movement through the sermons or religious lectures.

“In my opinion, this waste issue is about how to change the mindset. On this term, the most effective and vocals are NU and Muhammadiyah,” she said.

“We encourage for Muslims can bring their own bags to shop, not using plastic bags,” she said. “From all Muslims under NU and Muhammadiyah, they are expected to have strong influence.”

“The event is held in NU main office and live streaming to regions. We introduce the dangers of waste and how to manage them to NU members in Indonesia. Last month, we chose waste bank as the theme which we explained to NU assessment foundation on what is waste bank and what activities they’re doing. The plan is after Lebaran, we will discuss the issue of plastic waste,” said Ariyani.

She said that the declaration is proof that NU in environment section, which has 90 million members in Indonesia and ensure that all organizations under NU promote reducing plastic bag to local levels.

Meanwhile, Hening Parlan, environmental coordinator of Aisyiyah Central Office, said that reducing plastic bag is an important program related to back to nature program and will be disseminated through other activities to become Islamic culture.

“There will be an event, Green Idul Fitri, in July as we will send out letters to branch and regional leaders. Green Idul Fitri is designed with family as the basis where each families will reduce plastic waste by not using plastic straws, bring their own bottles and lunch boxes not made of plastic, and many more,” said Parlan.