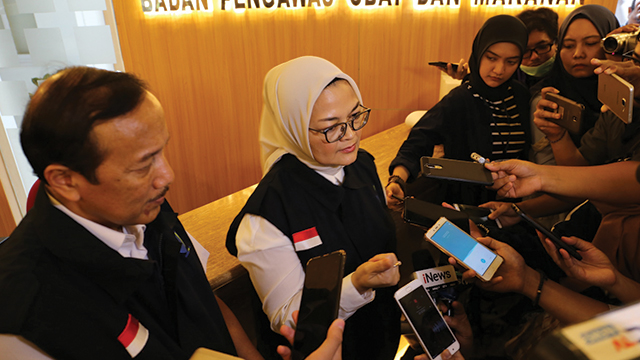 Jakarta (Greeners) – During Ramadhan Month and ahead of Idul Fitri, Indonesia’s Food and Drug Agency or BPOM, reminds public on illegal food products as the agency had confiscated at least 170,000 products from 796 distribution facilities, which amounts to Rp3.4 billion or US$236,126.

Penny K. Lukito, head of the agency, said compare to food intensification data in 2018, there’s an increase on volume and economic value in 2019.

During the period, Lukito said, inspections conducted on 1,726 retailers and food distributors, of which they found 110,555 food products from 591 distributors did not meet standards, with economic value reached more than Rp2.2 billion or US$152,575.

“The increase on volume and economic value is due to increased scope of monitoring on food intensification to districts and cities. For Ramadhan and Idul Fitri, the needs and demands for food products, especially processed food products, will be intensified for its monitoring until after Idul Fitri,” she said.

Furthermore, she adds that monitoring will be targeted on processed food without permits, illegal, expired or damaged, and street food for fast breaking or takjil for potentially contain dangerous substances, such as formalin, borax, and banned rhodamin B and methanyl yellow for food coloring.

READ ALSO: Indonesia’s Drugs and Food Law Will Be Set in 2019

For takjil, 83 out of 2,804 samples or 2.96 percent, checked by the agency are not qualified. They are divided into four groups, — jelly, colored drinks, noodles, and snacks –.