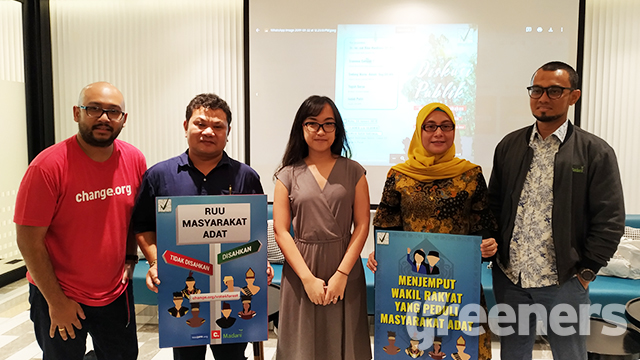 Jakarta (Greeners) – An environmental watchdog, dubbed as #Vote4Forest, launched a research on lawmakers’ track records in relation to environmental bills. The first series of the assessment is focusing on the perspectives and political decisions of the lawmakers on the Indigenous Peoples Bill, of which 12 out of 26 members agree with the bill.

“Our assessment discovers that there is no assurance that members of House of Representatives (DPR) from areas where indigenous peoples live supporting the bill of indigenous peoples. This assessment also reveals that from 28 members of the Legislation Body of House of Representatives actively participating in the discussion of the bill, only 46 percent is supporting the bill, [meanwhile] remaining 54 percent shows no support and reject the bill,” said Teguh Surya, Director Executive of Madani Berkelanjutan Foundation, in Jakarta on Wednesday (23/01/2019).

Surya said that out of 28 members of Legislative Body involved in the bill of indigenous peoples, 26 members are running again for 2019-24 period, raising questions on the course of the bill for the next five years.

“These indigenous peoples bill is an immediate importance as it accommodates the recognition and protection of indigenous peoples. Members of House of Legislative for the four years failed to grasp the essence of the Constitution, instead, prioritizing bills with less relevance to people’s welfare,” he said.

Meanwhile, Rina Mardiana, an academician of Agrarian Research Center of Bogor Agricultural Institute, said, “We have analysis that these members of legislative’ partisanship towards indigenous peoples are low.”

“Furthermore, there are indications that the members don’t understand about the indigenous peoples bills and the existence of these indigenous peoples,” she said adding that the analysis was a collaboration between Madani Berkelanjutan Foundation, WikiDPR and Change.org Indonesia.

She said that members of legislative have no political will, either from the government or decision makers, as there was inconsistency shown by parties supporting the bill.

Erasmus Cahyadi of Alliance of Indigenous Peoples of the Archipelago or AMAN said that the result is still uncertainty prompting disappointment from indigenous peoples as conflicts and criminalization are on-going.

“From the latest record, conflicts occur in East Sumba where customary lands are granted permits by the government to sugar cane company, PT Muria Sumba Manis. Consequently, it receives protests from indigenous peoples and demonstrations are continue to happen,” said Cahyadi.

#Vote4Forest is an initiative of collaboration between Madani Berkelanjutan Foundation, WikiDPR, and Change.org Indonesia, to provide public information related to lawmakers’ track records on environment issues ahead of the 2019 General Election.

The assessment is conducted based on qualitative and quantitative using main data from meetings on the indigenous peoples published through Wikidpr.org, official documents from the election committee or KPU on infopemilu.kpu.go.id, and news media reporting and social media.