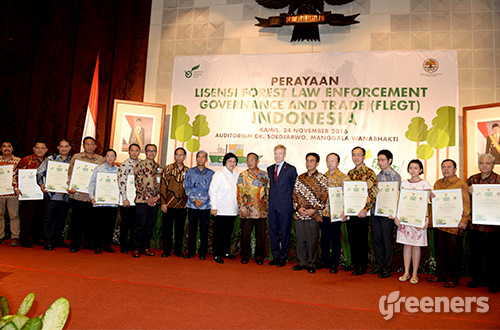 Jakarta (Greeners) – Following Indonesia’s timber legality assurance system, locally known as SVLK, have been adopted as part of Forest Law Enforcement Governance and Trade (FLEGT), it will increase the country’s revenue from European Union market, said a senior official, in Jakarta, on Friday (25/11).

Director General of Sustainable Production Forest Management, Ministry of Environment and Forestry, Putera Parthama, said there were 70 shipping of timber and timber products after FLEGT license was granted on November 15 and was predicted to reach US$24 million if demand was increasing.

“In total, this year’s income had reached US$10 billion, or increase 100 percent from last year’s export due to SVLK and FLEGT licenses,” said Parthama adding that it also proved Indonesia is no longer exporting illegal timber and timber products.

Coordinating Minister for Economics, Darmin Nasution, said that FLEGT license will increase Indonesia’s revenue from forestry sector which has become the country’s major revenue besides oil and gas.

“Forestry sector contributes 1% of Gross Domestic Product and 1.3% of tax income. So, we hope that it will help to boost global trade,” he added.

Indonesia had shipped its first timber products from Tanjung Priok Harbor to European Union. The shipment will be accepted in Brussels, Belgium and attended by Ministry of Foreign Affairs, Retno Marsudi, on Monday.