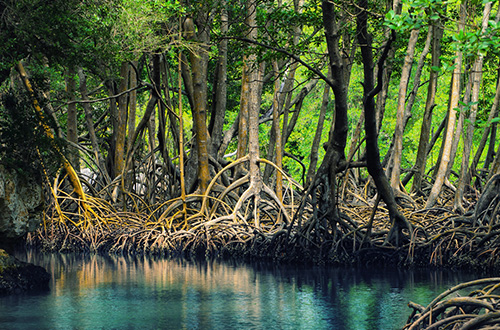 The Global Mangrove Alliance, comprise of The Nature Conservancy, Conservation International and World Wide Fund for Nature (WWF), aimed to set up a global cooperation to optimize the experiences, funds, knowledge, resources, and diverse sets of skills to increase awareness on the importance of mangrove as coastal ecosystem.

Maria Damanaki, Global Managing Director for Oceans of the Nature Conservancy, said that the alliance would set up a working plan based on joint consultation with experts which lead to local, regional, and global movement along with public, governments, and leaders of private sectors who are committed to halt and restore mangrove forests.

The target is to restore 20 percent of global mangrove ecosystem by 2030 as the latest data showed it is declining of nearly 50 percent for at least half of the century.

“Many assume the benefits only for people near and inside the mangrove forests but the world need to know the positive impacts from protecting mangrove,” said Damanaki on Friday (24/2).

Mangrove forest, she added, served as transitional between oceans and terrestrial, provide protection from impacts of climate change by absorbing wave energy and storms, adapt to sea level rise, and stabilize coastal lines from erosion.

Senior Vice-President for Oceans of WWF, Brad Ack, said that despite of its important values for people living in coastal areas, mangrove forests have been destroyed and was predicted to have had lost one percent of world’s population per year.

If the loss rate, he added, kept on going and unstoppable, the world’s mangrove habitat could be destroyed in the next 100 years.

“It is an important work. So, the focus should be on increasing awareness on the role as global investment on coastal security and integrated management,” said Brad Ack.