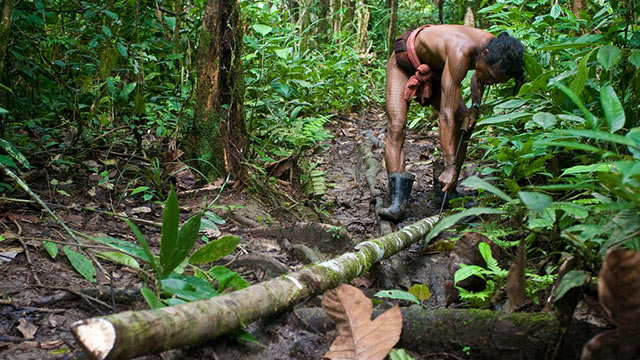 Jakarta (Greeners) – Amid interest on revision of conservation law, an activist said that it had excluded indigenous peoples as actor of conservation, in Jakarta, on Tuesday (11/4).

Kasmita Widodo, coordinator of ICCAs Indonesia Working Group (WGII), said that indigenous peoples as actor of conservation posses traditional knowledge which has yet to be acknowledge by government.

Meanwhile, Nur Hidayati, executive director of Indonesian Forum for the Environment, slammed on the drafted revision which included private security guards to protect the forest as not in line with the country’s justice system.

“Because, law enforcement in conservation management in the revision should be done by government officials not private sectors,” said Hidayati.

Furthermore, she said that the revision intended to protect areas was being infiltrated by business interests. Without acknowledging indigenous peoples, she added, the revision would only serve for business purposes.

She cited Indonesia’s genetic resources had become target from pharmaceutical companies. “We are not aware about biopiracy because they have never been revealed,” she said.

Meanwhile, Ilyas Asaad, Ministry of Environment and Forestry’s Expert Staff on Inter Central and Local Agencies, who also serves as head of revision team. said that he had not yet studied on the revision drafted by House of Parliament.

“On indigenous peoples, it is true, that we need to regulate because they have conservation areas in customary forests. Whether that’s going to be an option in the meeting is up to our discussion,” he said. ” Even if it would be brought up in the meeting, I think legislators will approve on the issue.”

On private security, he said that forest protection by people was allowed. However, he said that he had yet studied the draft to understand on the issue.

“There’s public supervision and it’s possible. Perhaps, that is the consideration from legislative as protection cannot only be from government. It needs the support from people. People here can also mean company but what we need to regulate is the mechanism. We’ll have to see the draft again,” he said.

The aim of WGII is to increase understanding on indigenous peoples implement conservation based on traditional knowledge.