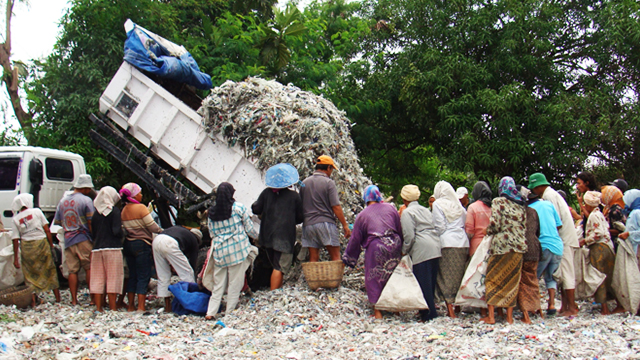 Senior advisor of BaliFokus, Yuyun Ismawati, said China is currently ranked first as the largest waste importer in the world and Indonesia is the second.

However, Chinese government is no longer accepting plastic wastes due to its National Sword policy.

Hence, it is affecting plastic waste trade. ASEAN nations, including Indonesia, are waste and plastic waste processor countries, either domestic or international.

China has the bigger role to absorb world’s plastic waste.

Based on a research from Amy L. Brooks and colleagues in 2018, “The Chinese Import Ban and Its Impact on Global Plastic Waste Trade” published by Science Advances, China absorb 45.1 percent of world’s waste, accumulatively, between 1988 and 2016.

“If China is the number one and already limit plastic import, then where will countries send their wastes? Because, currently the largest importers are Asians. Obviously, Indonesian government must be cautious, if not we’ll be flooded with plastic waste,” said Ismawati.

The waste comprises 74 percent of food packaging, 20 percent of household products, and six percent is personal items, such as diaper, soap, shampoo.

All of those wastes will be recycled in East Java, near Brantas river.

“These import wastes also sold to local residents for Rp1 million (US$70.60) per truck which can be resold for up tp Rp2 million (US$141.20). Meanwhile, non-recyclable plastic scrapes can be resold as fuel for local tofu factories,” Arisandi said. “Unfortunately, residues from imported plastic and paper oftentimes dumped into Brantas river or burn resulting water and air pollution.

Furthermore, he said Brantas river’s water contains 292 to 2,499 particle per microplastics per liter and its sewerage line contains 3,896 particles per liter.

It is concerning reality and dangerous because the river is the resource for six millions of customers throughout Surabaya city.

Meanwhile, Fajri Fadilah, a researcher at Indonesian Center for Environmental Law (ICEL), said that the Trade Minister Regulation issued in 2016 on non-toxic and hazardous waste import is sufficient, following the surveyor’s monitoring each month.

However, it is different reality in the field. The regulation only allows imported plastic from industries, not domestic waste from households.

“If you look at waste accepted by Indonesia, mostly they’re already contaminated by toxic and hazardous substances, which should not happen. The government should be strict on implementing the regulation and if the type of waste is not according to the regulation, then we have the rights to return the waste, if not they will pile up and create new problems,” said Fadilah.

The alliance’s recommendations for Indonesian government are to review regulations and policies on imported waste and scrapes, especially plastic and paper, to limit contaminated substances on imported waste and plastic/paper scrapes to less than 0.5 percent, to develop system and incentive to increase recycle waste percentage domestically, to ban toxic and hazardous substances as additive on plastics and while recycling, and to evaluate companies granted with imported plastic and paper scrapes permits.