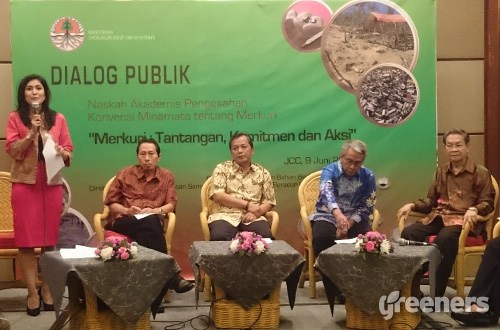 Jakarta (Greeners) – After three years of signing on the global treaty on mercury ban, Ministry of Environment and Forestry finally drew up academic documents as a preparation to ratify the convention, said an official, in Jakarta,Thursday (9/6).

On October 10, 2013, Indonesia had signed on the Minamata Convention on Mercury, in Kumamoto, Japan.

“By drawing up academic documents, we are hoping that the ratification process can begun as it is mandatory [as one of the convention signatories]. Once we completed the ratification process, we can move forward to draft the bill,” said Fery Huston, head of Program and Evaluation Unit, Directorate General of Toxic and Hazardous Waste Management, Ministry of Environment and Forestry.

Huston targeted the bill should be completed in 2017.

READ ALSO: Most of Hospitals in Jakarta Neglect to Manage Its Hazardous Waste

Mercury is a chemical found in nature that are toxic, persistent, bio-accumulated and can transfer long distance in the atmosphere. One of its infamous case of mercury poisoning is Minamata Disease, referring to heavily polluted and toxic Minamata Bay after PT Chisso dumped its waste contained with mercury back in 1953.

Huston said that there were not much exposes on impacts of mercury to environment and human health in Indonesia. Nevertheless, government and civil societies concerned with the issue have conducted surveys and researches in mining areas, such as Banyumas, Lebak, Sekotong and Minahasa. The results showed high level of mercury found in miners’ blood, hair, and nails.

“We have to do something, at least public awareness. We cannot let this case continue on and repeating Minamata disease in our own country,” he added.

As a result, he said the government was looking for alternative technology for miners.

“We are trying to provide alternative technology for miners. We have already cooperate with BPPT [Agency for The Assessment and Application of Technology] and included APRI [Association of Indonesian Artisanal Miners] so that they don’t have to use mercury with this new technology. But, it would run in stages because different characteristic different locations,” he said.

Mercury use often found in health industry, such as for thermometer and dental amalgam, to extract gold in artisanal mining, lamp industry, and other industries. Huston added 70-80 percent mercury in Indonesia mostly came from China.

Meanwhile, Rachmadhi Purwana, public health expert and also member of the academic document team, said that mercury distribution has reached concerning level in Indonesia because it was not an instant impacts bit slowly and insidious.

“The danger of mercury is not just affecting the nerve but also liver, kidney, lungs, and the heart. Once they are affected, it would be incurable,” said Purwana.