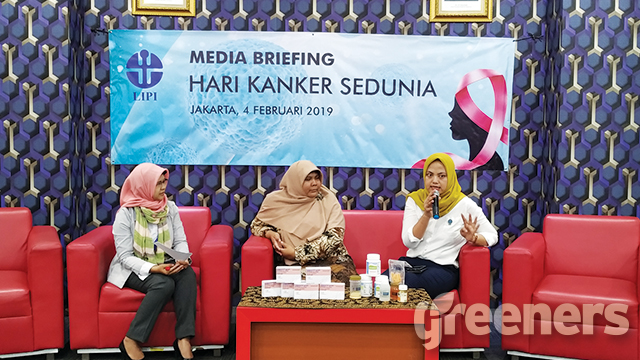 Based Basic Health Research of Ministry of Health, cancer prevalent has been increasing from 1.4 percent in 2013 to 1.8 percent in 2018.

However, only 80 percent of cancer cure medicines available are made of natural ingredients or synthetics since 1980s.

“Since 2004, we have developed marine biota such as sponge, seaweed, and sea cucumber for cancer cure. These marine organisms have bio-active chemicals that can be developed as candidates for cancer cure agents with curative ability to cure and prevent cancer,” said Pangestuti, in Jakarta, on Monday (04/02/2019).

Furthermore, she said that marine biota for cancer cure are sponge and sea cucumber, meanwhile seaweed can be used to prevent cancer which also can be used as food to improve body resilience and reduce risks for diseases, such as cancer.

Currently, the development is still in pre-clinical tests. To support the research, LIPI is cooperating with Spanish pharmacy company, Pharma Mar.

“This marine biota based cancer cure is not marketable yet as it is still in pre clinical trials and it will require five to 10 years of research. Hence, to speed up this research, we need the support from local pharmacy, state-owned companies or government. From previous cases, there were agreements but failed due to unfitting clauses and couldn’t reach the middle way,” she said.

“The research requires lots of funding, so we are hoping for interested pharmacy companies of state-owned companies working together to develop this marine biota based cancer cure,” she said.