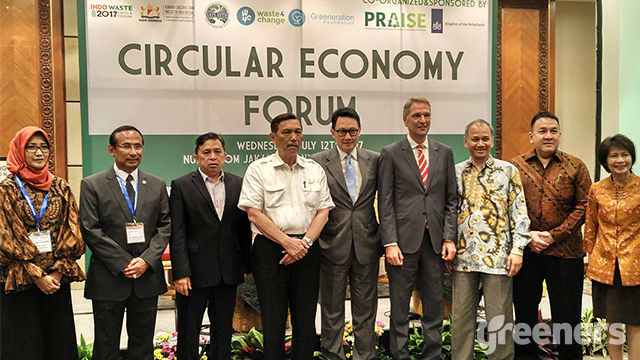 “This is concrete. All stakeholders need to be involved to tackle waste issue,” he said at Circular Economy Forum in Jakarta on Wednesday (12/7).

Starting next month, he said, the ministry will be cooperating with Ministry of Public Works and People’s Housing to try out mixing plastic waste with asphalt for road development in Bekasi.

“We learn from India which has developed 120,000 kilometers of road from plastic waste. We just need to set up the mechanism on finding and collecting plastic bags,” he said. “If this can be done, it will impact to marine tourism and ecosystem. But, this should not be only talks. It must be done.”

Vice Chair of Commerce and Industry Chamber (Kadin) on New Energy, Halim Kalla, said that Indonesia needed to sort out on how to run its economics wisely and less destructive.

Kalla said that the habit of producing goods and throw them away is dangerous habit for nature and human.

Learning from developed countries in the world, Kalla said that waste management has developed for the last decade and can no longer be seen as linear process (produce-use-throw) but using circular economic approach where material use was designed to restore and regenerate.

“Kadin supports this economic model to solve waste issue in Indonesia. Industries can participate by giving added value on those products to prevent low selling prices,” he said adding that his office is ready to support.