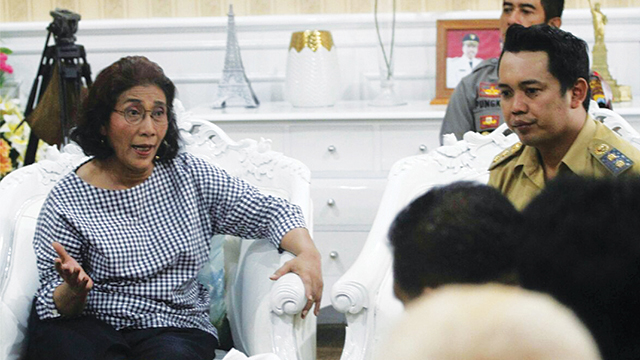 As Minister Susi Pudjiastuti monitored the event, which would be concluded on Thursday, she added that the government is working together with State Owned Companies and banking to provide insurance for fishermen willing to change their old cantrang vessels.

“Jasindo will insure the vessels along with its crews. So, if there’s any accident, banking will receive compensation from insurance [company]. The boat owner will not lose their ships because they’re being insured. We will assist them, for instance the value of the ship is one billion rupiah, the debt will be Rp700 million, meaning that the bank is secured and boat owners are secured,” said Minister Susi.

Furthermore, the government will also provide assistance for credit restructuring if experiencing bad credit loans in one or two years time. It has been agreed by banks such as BRI, BNI, Bank Mandiri, BTN and Bank Jateng.

Meanwhile, Susi said that the results of registration, verification and validation in Rembang showed that almost all cantrang ships marked down the size of the ships up to above 30 T.

“The government is being nice to markdown instead of penalize. The punishment is actually criminal charges,” she added.

In addition, Susi warned Rembang fishermen to comply to regulations and agreements, including to fish in regulated route for cantrang fishing areas.

“Cantrang vessels allowed to fish in lane 2 (WPP 712), 4-12 mil. Above that, that’s Kalimantan areas, its people would be angry and they’re facing the risk of being detained,” she said.