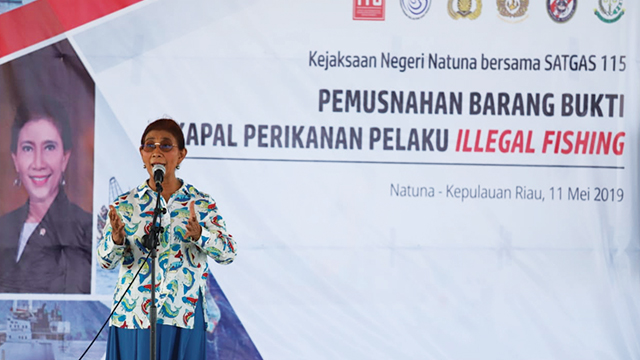 The act has brought positive impacts to Indonesia’s resources and business.

Susi Pudjiastuti, Minister of Marine and Fisheries Affairs, said that sinking foreign vessels caught illegal fishing bring massive benefits to the country from the point of views of resources and business.

From resources, Indonesia’s marine biomass has been increasing in the last few years, which affects business as there are increase of exports and fishermen exchange rate (NTN) for the last four years.

“Our marine biomass has growth 300 percent compare to previous year. Fertile seas, more fishes, more bigger sizes. Sinking vessels may seems creepy, malicious, but it’s a marvellous way out to tackle illegal fishing practices in our country. If not, how many years you want for this illegal fishing to be resolved,” said Minister Susi in Natuna on Saturday (11/05/2019).

Meanwhile, fisheries’ gross domestic product for the third quarter of 2018 reached Rp59.98 trillion or US$4.14 billion.

The number is higher compare to same period in 2017 which reached Rp57.84 trillion or US$3.99 billion. Despite of slow growth from 6.85 percent in the third quarter of 2017 to 3.71 percent in the same period of 2018, it still experiences increase for each quarter and on fish production numbers.

Minister Susi said that thanks to Indonesia’s firmness to eradicate illegal fishing that fisheries trade balance becomes the number one in Southeast Asia. In addition, Indonesia is the biggest supply for tuna in the world.

“Currently, Indonesia’s tuna is the world’s number one. This is the number two exports in Europe market. It is a remarkable thing of which even being monetized, it would worth of billions of dollars. Fishermen exchange rate rises more than ten percent in the last four years. From business calculation, the war against thieves of fishes is a beneficial business for the country,” she said.

Furthermore, she said that the idea to auction foreign vessels is not the best solution to tackle illegal fishing in Indonesia.

She cites several cases of which the boats caught breaking the law and being auctioned, were being used again for illegal fishing in Indonesian waters.

Hence, she said the government must not hesitate and firm in creating deterrent effect for perpetrators by sinking the vessels.

“However, the issue is we often hesitate, we are not confident. It was only two years, oh, why not auction them? Will it not be a waste to sink Rp10 billion (US$691 million) of vessel, then you can get Rp1 billion (US$69 million) if you auction them. Meanwhile, for one trip of illegal fishing, they can get Rp3 billion (US$207 million. Don’t you care about our fishes? That’s our economic source,” she said.