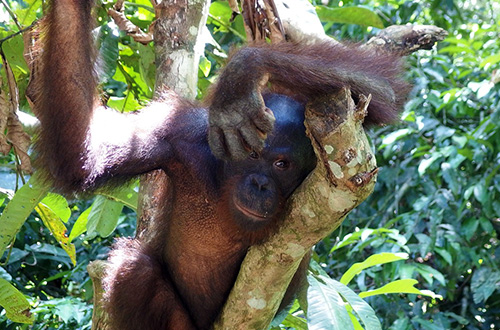 Tachrir Fathoni, director general of natural conservation and ecosystem, said that the status had given psychological impact to Indonesians as considered to be responsible and failed to conserve orangutans.

Fathoni argued that based on rough data from the government, there were more than 100,000 orangutans in conservation areas or in captivity. Based on the data, government had specifically asked to change the status of the species.

“We are confident with conservation efforts in situ and ex situ as there are experts and conservation agencies run by civil societies,” he added. “However, there is still illegal wildlife trading and trafficking.”

READ ALSO: Conservation Law Revision To Be Finalized This Month

Arnold Sitompul, director of conservation, WWF-Indonesia, said that the status should be a reminder to all stakeholders that protection and habitat restoration of Bornean orangutan becomes very important. In addition, the connectivity between orangutan habitat should also be established to ensure its population.

In Kalimantan, said Sitompul, orangutans live outside of protected areas, such as timber plantation areas which have yet to practice sustainable forest management, mining and plantation concessions which resulted to fragmented habitat.

Forest fires in the past few years have also contribute to declining forest cover. It is also resulted to increasing hunting and man-orangutan conflicts to occur.

To maintain population and its sustainability, he said that the efforts to expand protected areas must be strong enough and sustainable management practices must be ensured.

“WWF conservation program has shown that orangutan population can be maintained in logging concession if managed sustainable. This approach should be applied in larger landscape to increase the potential and opportunity to save the species from extinction,” he added.

Bornean orangutan population has been declining for the past few decades prompting the species to be included in the Critically Endangered species of IUCN. Major drivers are loss and degraded habitat and illegal hunting in Indonesia and Malaysia.