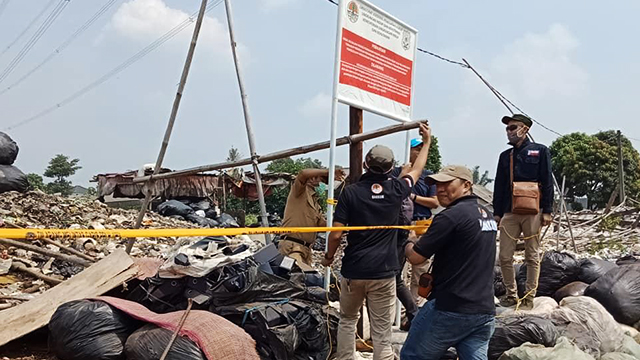 Bogor (Greeners) – Ministry of Environment and Forestry’s investigators sealed illegal landfills which have been operating at least 30 years in Bogor district of West Java, said an official on Saturday (25/05/2019).

Muhammad Nur, head of law enforcement at the ministry for Java, Bali and Nusra regions, said that four locations being sealed have no permits and have been operating for long time.

Investigators are still investigating three managers, — US, HN and AS — and summoning two more people as they were not present in locations during the closing.

“Currently, there are people being investigated for illegal waste piling, after the investigation there’ll be further development. Illegal landfill in Bogor has been going on for 15-30 years in four locations, said Nur to Greeners via short message.

Furthermore, he said that the seal was a follow up on reports from people disturbed by the illegal landfills, which are violating the 2008 Law on Waste Management and the 2009 Law on Environmental Protection and Management.

Based on facts found by the team, the landfills have no permits and do not follow best practices of sustainability, and resulted to negative impacts on people’s health and environment.

Novrizal Tahar, director of waste management at ministry of environment and forestry, said that the cause of waste issues in Indonesia is low capacity of regional administration, lack of public awareness, rising plastic waste volume, and not mandatory for producers, and law enforcement.

“The seal by law enforcement is a positive thing and must be supported. It is time to push law enforcement on waste issues. Law enforcement is the last resort as it is expected for deterrent effects to all violators, either from local government or other parties in illegal dumping on waste management,” said Tahar.

Furthermore, he said that best waste management only being implemented for 32 percent, remaining 68 percent is not sustainable. Meanwhile, there is still 60 percent of landfills operating is open dumping.

If convicted by the court, the perpetrators in Bogor will face at least four to maximum ten years in prison and at least Rp100 millions (US$6,951) to Rp5 billion (US$347,552) of fine under the 2008 Law on Waste Management.

In addition, three years and maximum of ten years in prison and fines between Rp3 billion (US$208,546) and Rp10 billion (US$695,228) under the 2009 Law on Environmental Protection and Management.