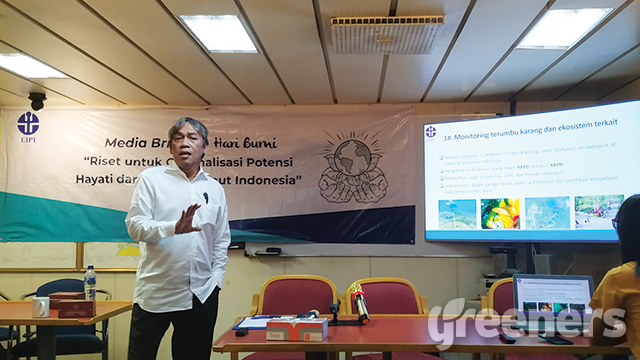 “LIPI conducts massive monitoring in Indonesia on its coral reef and related ecosystem in at least 40 locations of Indonesia’s water areas. This year, there are 17 locations will be monitored. From the continuous monitoring, [we] will develop coral health index and in the short term, there will be health index for mangrove and seagrass,” said Dirhamsyah, head of Oceanography Research Center in Jakarta, on Monday (22/04/2019).

Furthermore, he said that based on research in 2018, in average, coral reef health index is scale 5, which means in moderate condition with high potential of recovery but low biomass of coral fish.

“Previously, we have written recommendation letters for Gray reef shark (Carcharhinus amblyrhynchos) as minimum of two meters long and 50 kilograms of weigh. We also implement similar things for the remaining marine species. Their extinction is due to massive exploitation for trade,” he said.

Dirhamsyah said that threats for marine biota is also coming from waste plastic pollution which is currently world’s attention. Indonesia as the second biggest marine waste polluter in the world is responsible for recovery.

“LIPI has assessed to prove claims “Indonesia as the world’s second largest marine waste polluter” by Jenna Jambeck. We have researched in 18 locations throughout Indonesia,” he said. “In this research, we found that 468,511 to 594,558 tons of plastic waste per year leaked to oceans. Regions contribute to waste litters are from Padang, Makassar, Manado, Belitung and Ambon.”

Based on the data, he urged for all stakeholders to tackle terrestrial waste issue as talking about conservation or protection of biota requires cooperation.

“We need to really work together for conservation, we have plenty of homework. This waste issue annoys conservation, all stakeholders need to care about plastic waste issue,” he said. “My opinion, the key is terrestrial, if all the wastes managed properly in the lands, they will not be dumped into oceans. Marine wastes, which we are researching, are coming from the lands. There should be commitment and law enforcement, side by side. Earth will be okay if those two things working well.”