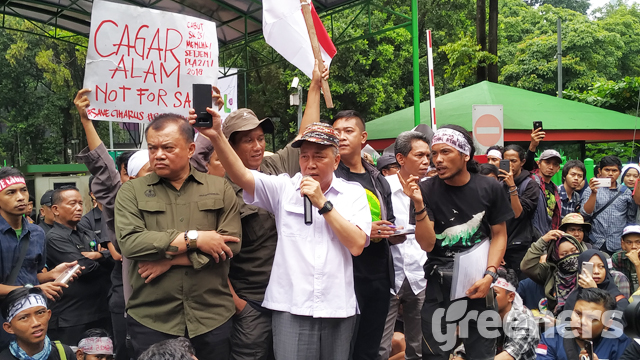 Jakarta (Greeners) – Green activists held protests on Wednesday (06/03/2019) following Minister of Environment and Forestry’s decision to move down the status of Kamojang and Papandayan mountains from nature reserve to nature recreation park.

On 10 January 2018, Minister of Environment and Forestry issued a decision to change the-2,391 hectares of Kamojang Nature Reserve and the-1,991 hectares of Papandayan Nature Reserve, located in Bandung and Garut districts of West Java, respectively, to nature recreation park opening the door for tourism.

Wahyudin, advocacy staff of West Java chapter of Indonesian Forum for the Environment (WALHI), said that the status change will damage Ciharus Lake, an ancient lake that runs through Kamojang Nature Reserve and the sole source of Citarum and Cimanuk rivers which have vital roles for South Bandung residents.

“From Kamojang area to Papandayan area, even before [the ministry] changed the status from nature reserve to nature recreation park, massive destruction is on going, for example, motor trails for recreation, illegal logging, and other land use changes for tourism, including swimming pools, cafes, and villas,” he said during the protest which was under the West Java Nature Reserve Alliance.

Furthermore, he said that the areas also produce geothermal, as another environmental service, which has been managed by PT Pertamina Geothermal Energy since 1074.

The power plant occupied at least 56,85 hectares or 1.97 percent out of total nature reserve with 235 megawatt installed.

“All of those activities cause deforestation leading to spatial plan damages to sedimentation and floods,” he said citing the 2016 flash flood in Garut as the result of destruction of Kamojang and Papandayan nature reserves.

He added that the protest of the decision is the effort to save South Bandung as the last frontier of South Parahyangan.

“Our demands are clear. Nature reserve is the highest status [of conservation areas] which must be saved and current destruction must be handled by the government by not moving down Strict Nature Reserve to Nature Recreation Park,” he said.

At least 20 protesters were granted audience with Wiratno, director general of Natural Resources and Ecosystem Conservation, and resulted with four recommendations to review the ministerial decision.

Wiratno said that they agreed to review the ministerial decree with four recommendations, — four directorate generals to recommend to suspend the decree to the minister, the ministry to establish a review team comprises of related stakeholders, including from the alliance, to stop all activities in these locations, and to evaluate West Java Natural Resources Conservation agency’s performance.

“This evening, I will report to [Environment and Forestry] Minister [Siti Nurbaya] on the recommendations [agreed] at the forum on the status change of parts of Kamojang Nature Reserve and Papandayan Nature Reserve to become Nature Recreation Park,” said Wiratno. “[There are] motor trails in Kamojang Nature Reserve as part of environmental service because they don’t know that it’s strict nature reserve. In addition, geothermal energy has been there for a long time, we cannot just abruptly close it down, process needs to be consulted to other parties.” 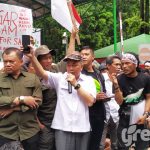