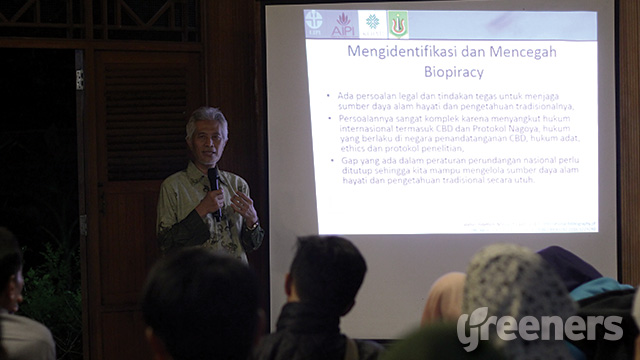 Endang Sukara, senior researcher on microbiology of Indonesian Institute for Sciences (LIPI) said that Indonesia is still not ready to run the 2013 Law on Nagoya Protocol. Photo: greeners.co/Ady Kristanto

CBD had been ratified under the 1994 Law on United Nation Convention on Biological Diversity Ratification, meanwhile, the latter was ratified under the 2013 Law on Nagoya Protocol which discussed on genetic natural resources benefit sharing.

Unfortunately, Endang Sukara, senior researcher on microbiology of Indonesian Institute for Sciences (LIPI) said that despite of ratifying Nagoya Protocol in 2013, Indonesia has yet to set up national strategic plan on Access Benefit Sharing (ABS).

“We have to immediately brought in best negotiators for this issue and it must be done cases per cases. We also need to have lawyers in the biodiversity field. So, even if we ratified the 2013 law, Indonesia does not have a strong position,” said Sukara while talking at Diskusi Bhumi, held by Indonesian Botanical Gardens Foundation, in Jakarta, on Wednesday (27/9).

Nagoya Protocol is aiming to provide access and benefit sharing for genetic resources uses and traditional knowledge, including its derivatives. Other aim is to prevent biopiracy.

Furthermore, he said, Indonesia’s homework was to actually implement the 2013 law considering there were no derivatives that regulated the implementation of Nagoya Protocol in the ground and no management authority had been formed.

“I have recommended to use the existing institution with the suitable competence, for instance [Ministry of Environment and] Forestry for biodiversity inside forest areas, LIPI as academic reviewers, agriculture, marine and fisheries, all of those areas need to have clear basis,” he said. “There should be a proper clearing house connected with all parties ratifying the Protocol. The important thing now is to form the management authority as soon as possible.”

Diskusi Bhumi is an event part of Jaga Bhumi Movement initiated by Indonesian Botanical Gardens Foundation. The movement was launched on May 2017 and will end on April 2018. For further information on the event, go to www.jagabhumi.com.