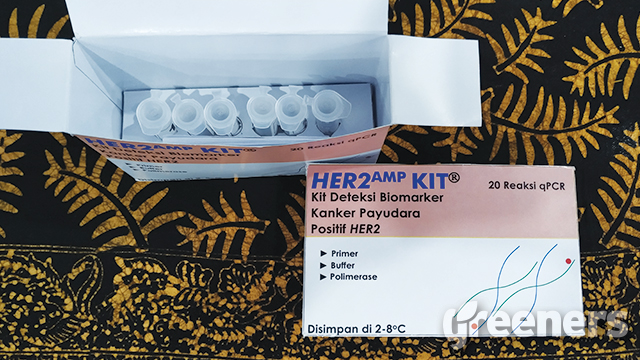 “This detection technology is not the prevention but to get a sense of further steps for therapy with trastuzumab,” said Desriani, head of Biotechnology Research Center in Jakarta on Monday (04/02/2019).

The latest report released by International Agency for Research on Cancer, World Health Organization (WHO) predicts 18.1 million new cases of cancer and 9.6 millions of deaths in 2018.

“At least 20 percent out of breast cancer patients or one out of five are positive HER2. This positive HER2 is obtained because of estrogen receptor and progresteron receptor are negative. The excess of protein of HER2 is growing cancer cells and widely spreading compare to cells with normal protein level. So, this HER2 kit will be used to detect whether patients are categorized as HER2 patients to determine the therapy for patients,” she said.

She said that the kit is under development and still needs further tests, such as sensitivity, specification, stability, and blind test.

Ministry of Health has expressed there will be further research on the kit.

With human serum albumin, the diagnosis via HER2 kit is validated by Chromogenic In Situ Hybridization or CISH method as 86 percent compatibility to detect the status of HER2 on cancer patients.