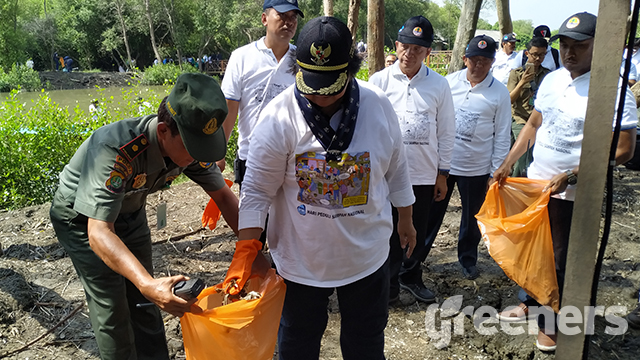 Jakarta (Greeners) – Marking the 2019 National Waste Care Day, Ministry of Environment and Forestry or KLHK set up clean-up events in 74 locations of national parks and conservation areas in the country on 4 March 2019.

The event was attended by less than 37,000 people. The utilization of environmental services on conservation areas have been producing wastes, especially plastic waste.

Minister of Environment and Forestry, Siti Nurbaya, who attended the clean-up event in Angke Kapuk Nature Recreation Park in North Jakarta, said that the utilization of environmental services in forest areas, including national parks and conservation areas will eventually pose another impact, such as increasing waste volume in the protected areas.

“It is confirmed that here [Angke Kapuk Nature Recreation Park] is covered with plastic waste. In the future, [the authority] will issue regulations for visitors similar to national parks for the hikers. [The visitors] will be checked for their belongings, especially food packaging, and will be checked again when they existed, did they bring the waste with them or not. We are setting up the regulations and implementations. They will be fined and not necessarily be punished,” said Minister Siti on Monday (04/03/2019).

Based on the survey by Waste Management Directorate at the ministry on 15 national parks and mountains in 2016, each hikers or visitors produce three kilograms of waste in average. From the waste, the largest proportion is plastic waste with 56 percent, with organic waste only 14 percent.

“These clean-up events are done simultaneously, which is the government’s effort to see and responds public dynamics, demands and enthusiasm not to produce plastic waste,” she said. “Hence, our challenge for this waste issue is on how to manage waste in local level because the threats of waste pollution is not just impacting national parks or conservation areas in mountains or terrestrials, but also effecting our marine national parks.”

In addition, Minister Siti held conference calls with other regions held clean-up events in their national parks and conservation areas.

Head of Kampar district reported they collected 350 kilograms of plastic waste, 35 kilograms of paper, and five tons of organic waste, including from traditional markets.

Meanwhile, Jayapura mayor stated that they have managed to collect two tons of waste from local churches and mosques.

Ahmad Baihaqi, education and outreach staff of Kehati Foundation, who also represents Biodiversity Warrior, said that the government could not move and work on its own to protect the environment.

“It takes synergy and collaboration between governments and communities and private sectors because to protect the environment requires all help from all parties,” said Baihaqi.