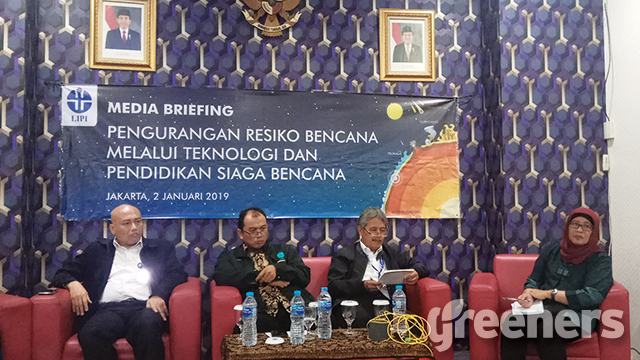 Jakarta (Greeners) – Indonesian scientists recommends for government to establish Early Warning Province and to regulate coastal areas spatial planning considering the country’s vast areas. In addition, it is no longer sufficient to depend on tsunami lead time as early warning system.

“The important aspect if we’re talking about disaster risk reduction is spatial planning. Although we already have Presidential Regulation on Coastal Border Areas issued in 2016, it seems being completely ignored. Despite of having the best early warning system, if spatial planning is not addressed then it will not do much to save lives,” said Eko Yulianto, head of Physics Research at the Indonesian Institute of Sciences (LIPI), on Wednesday (02/01/2019), in Jakarta.

The presidential regulation explains that coastal borders are terrestrial areas along the beach with its wide is proportional with the shape and physical condition. Coastal borders are a minimum of a hundred meter from the highest tide spot to the lands.

Furthermore, the regulation stipulates that provincial administration with coastal borders need to declare the areas in its Provincial Spatial Planning regulation. In addition, for disaster-prone areas in coastal areas, the borders can be declared less from the measurement and must apply disaster building code guidance.

Yulianto said that central and regional governments need to implement risk disaster based spatial planning considering rampant development in these areas, including cottages in Lembang, Bandung of West Java. The cottages were built on top of Lembang fault.

“We cannot blame companies of the cottage because they were permitted by local authorities. The development is exactly on top of Lembang fault as I have researched a few years ago. [The condition] is similar with Palu which liquefaction occurred 500 years ago,” he added.

READ ALSO: Scientists: Flores Back Arc Thrust, the Cause of Lombok Earthquakes

He also recommends to establish Early Warning Province as areas in Indonesia has shorter lead tsunami, with less than ten minutes. It will be too risky to depend on the early warning system.

“It needs to be classified which areas are included in the Early Warning Province. [Areas] such as north coast areas, Bali, Lombok, Mentawai with short tsunami lead time must be included in the Early Warning Province and install as many as early warning systems as possible along with pay attention to its spatial planning. Meanwhile, with south coast of Java that have longer lead time of 40 minutes, it will not be much of a problem for less early warning system,” he said.