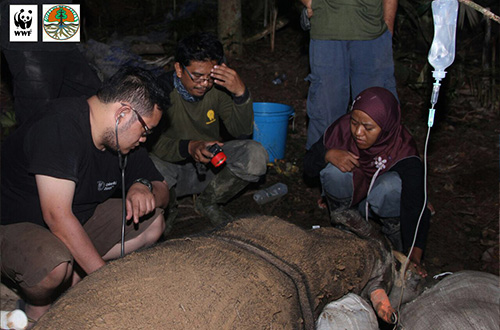 Jakarta (Greeners) – A team of veterinarians from Ministry of Environment and Forestry, Indonesia Safari Park, Indonesia Rhino Foundation, Bogor Agricultural Institute, and WWF-Indonesia, announced the death of Najaq, a Sumatran rhino which had recently been rediscovered in West Kutai of East Kalimantan, on early Tuesday (05/04).

The cause of death was severe injury from snare on the left leg. The female rhino, aged ten years old, was suspected to be trapped since September and when captured, the snare was cut off. But, the remains have already attached to her skin.

“The medication given by the team was responded positively. However, the wound on her left leg was severe and causing infection. We would only know for certain on the cause of Najaq’s death after autopsy,” said Muhammad Agil, one of the vets in a press release to Greeners, in Jakarta, on Tuesday (05/4).

Najaq was spotted in a camera trap on October 2015 with snare attached to her left leg. The team then tried to capture Najaq to release the snare and was given medication.

On March 12, the team managed to capture her and was immediately given antibiotics and anti-inflammatory medicines, along with vitamins from the team. The effort had been supported and consulted with international experts of Australia zoo, Tarongga Zoo-Australia, Cornell University – USA.

Her condition was increasingly well indicated by good eating habit but still had infection in her left leg. But for the past few days, Najaq’s condition was declining and finally dead, suspected from infection of the snare wound. After autopsy, she will be preserved for the sake of science.

CEO WWF-Indonesia Efransjah said that Najaq’s death was a lesson learned that it was not easy to save endangered species population such as Sumatran rhino.

“It is a lesson learned that to save one rhino is difficult and it needs expert support and intensive resources,” he said.

Director General of Natural Resources Conservation and Ecosystem at the Ministry, Tachrir Fathono, said Najaq’s discovery was the evidence that Sumatran rhino still exist in Kalimantan after considered being extinct.

“That is why, the ministry is trying to continue protecting Sumatran rhino in West Kutai, East Kalimantan,” he said.

Sumatran rhino was spotted in West Kutai in 2013 by a survey team of WWF-Indonesia. By mid 2013, camera traps have been recording rhinos wallowing in mud confirming the findings of their footprints.

From the initial prediction, the Sumatran rhino was of four to five years of age. However, from the dental composition, the doctors stated that Najaq was ten years old.

Sumatran rhino is one of two rhino species in Indonesia listed as critically endangered with less than 100 individuals in Sumatra island.

The Sumatran Rhino Protection Team in West Kutai of East Kalimantan, was established based on Director General of Natural Resources Conservation and Ecosystem No. SK. 300/KSDAE-KKH/2015 comprises of government officials from ministry, provincial and district, academician, and conservation institution working on rhino conservation in Indonesia.