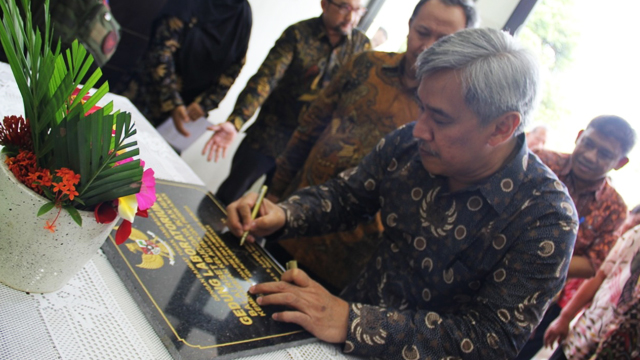 “Indonesia has at least 4,768 freshwater fish and seawater fish species, however, less than 50 species are traded. It is our task to develop [ornamental fish] to become flagship commodities for Indonesians and to transform into source of income, economical sources and new innovation,” said Widjaya. “We start with the commitment and ready to implement. My target is 100 new species to be developed at the research center in 2019.”

Based on Global Innovation Index in 2017, Indonesia ranked 88 out of 128 countries, below other Southeast Asian nations, — Singapore, Malaysia, and Thailand –.

“The lab is to develop genetics of ornamental fish which we have. The research center is one step ahead to strengthen and multiply new commodities of ornamental fish to be publicly launched. After this breeding, it is expected that Indonesia becomes the world’s best ornamental fish because the products are improved with technology innovation,” he said.

Other aim, he said, is to set the lab as the place to learn about ornamental fish for university students, technical, and high school students in Indonesia.

“I encourage for innovative research and useful for users. Hence, the researches can be used in the academic world as science and public also industry people to increase competitive productivity,” he said.

Ornamental fish, said Widjaya, is becoming a commodity among collectors with Indonesia’s export value reaches 60 million US dollars per year of which seven percent comes from world’s market.

“Ornamental fish in Indonesia, including arowana in Pontianak, koi fish in Blitar, betta fish, and botia fish in Jambi, the priciest fish is arowana fish which could worth billions of rupiah. If you look further that ornamental fish is the superior in Indonesia, which is why we are serious in developing these ornamental fishes, starting from certification and traceability process, so that certified ornamental fish cane be identified from Indonesia,” he said. “Furthermore, all ornamental fish will be tagged so we will know the origins. If we apply that, I am certain that Indonesia will be number one in the world.”

Meanwhile, head of fisheries research center, Waluyo Sejati Abutohir, said that currently the center has submitted the proposal to National Accreditation Committee to certify the lab in 2017.

“We hope the process can be finalized in 2019, so that the ornamental fish lab can offer high quality and prime service to users. Lets encourage [public] to apply innovation technology developed by the research center,” said Abutohir. “I also encourage all of us to increase added values of the lab’s facilities being developed for research cooperation, education and capacity building of human resources in ornamental fish.”