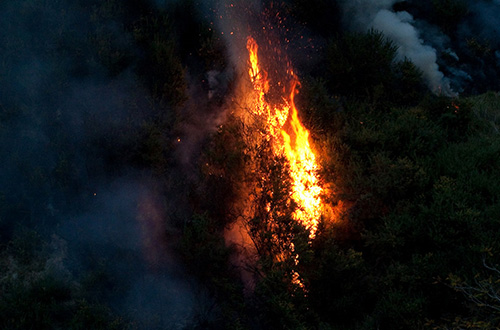 Jakarta (Greeners) – Increased hotspots have been spotted in several provinces, such as Riau, South Sumatra, South Sulawesi, and West Kalimantan, in the past few weeks, said a senior official.

Head of Data and Information Center, National Board for Disaster Management (BNPB), Sutopo Purwo Nugroho, said that Riau and several Sumatran areas, which have two phases of dry season, — January to March and June to October –, would be severely impacted.

“The first period will not be as dry as the second phase. This long dry season is caused by hotspots in several areas,” he said in Jakarta, on Wednesday (25/1).

Based on Ministry of Environment and Forestry data, South Sumatran and South Sulawesi have shown increase in hotspots. Meanwhile, Riau has one hotspot just like last week, different with West Kalimantan, which experienced high temperature and has five hotspots but declining to no hotspot.

“For Papua, we have yet to discover any hotspot in the areas,” he added.

In a national coordination meeting, Coordinating Minister of Politics, Law, and Security, Wiranto, and Minister of Environment and Forestry Siti Nurbaya have instructed all parties to be aware on the potential of forest and land fires this year as resulted from drier season than last year’s.

“With that potential, Minister of Environment and Forestry had prepared prevention efforts,” he said adding the coordination also between BNPB and local administrations prone to forest and land fires.

Riau Governor Arsyadjuliandi Rachman said that he announced alert status for forest and land forest which already active since Tuesday (24/1) to 30 April, or 96 days. This status was declared following Rokan Hulu district and Dumai city have applied the status. In addition, to prevent more fires as early as possible.

The status declaration was followed by the police and other law enforcers to set up forest and land fires task force and re-active posts to officially start the job.

Furthermore, he added President’s instruction to monitor forest and land fires from all government levels.