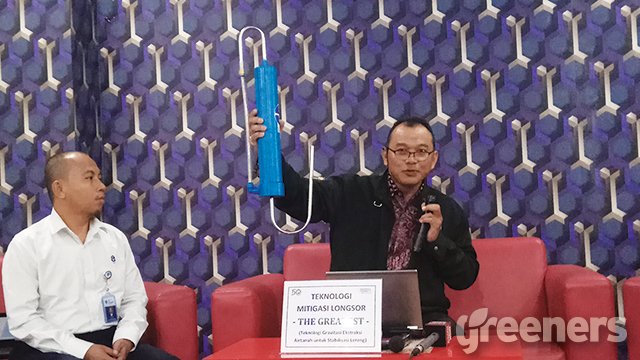 The team, led by Adrin Tohari of Geotechnology Research Center of Indonesian Institute for Sciences (LIPI) said that the Greatest, a ground water extraction technology for stabilizing slope, decrease water in the slopes to prevent landslide during rainy season. The extraction technology uses the siphon principle, the different water ground pressure in the top and below the slope.

“The siphon method is a device to transfer liquid from containers that cannot be laid down. The principle is to extract ground water based on height difference of ground water similar to transfer gasoline from motorcycle tank to jerrycan using a hose,” said Tohari, in Jakarta, on Tuesday (13/2) adding LIPI also developed Wireless Sensor Network for Landslide Monitoring or LIPI Wiseland.

Furthermore, Tohari said that the method has components comprise of siphon well, siphon pipe and flushing unit and its mechanism was affected by the distance and position of siphon well and quality of ground water.

“We also run field tests in Cibitung slope, Pangalengan, Bandung. From the tests, we manage to extract ground water as much as 133 liter per hour through flushing unit. With time, the number decreasing to 19 liter per hour. It is a result of the pipe experiencing blockage caused by sediment of water in the hose,” he said.

The research and development of The Greatest started in 2013 and produced a prototype of single chamber flushing unit. The tests run at Cibitung was flushing unit version 1.1.

READ ALSO: Indonesia’s Ministry of Defense and KEHATI to Set Up Laboratory for Bamboo

Meanwhile, LIPI Wiseland is used to monitor ground movement using wireless sensor network. The advance of the technology is to reach wider monitoring areas based on the sensor network, provide data real time and high accuracy, and has independent power supply using solar panel power and dry or lithium battery.

“The function of LIPI Wiseland is not to prevent but more to reduce risks of landslides. It’s more to monitor and early warning system. If landslides cannot be prevented, at least it will reduce casualties,” said Suryadi, researcher of Physics Research Center of LIPI.

Since 2008, LIPI Wiseland has been revised three times. The technology also has mobile wireless gateway, a small carry-on luggage, which is used to monitor short term such as for building construction and landslide emergency response.

“We hope these researches can be useful for people, especially to detect the danger of landslides,” he said.